Jellyfish are a common sight in Myrtle Beach, South Carolina, and are a source of both wonder and concern for beachgoers. These aquatic creatures are known for their distinctive bell-shaped bodies, long tentacles, and venomous stings. 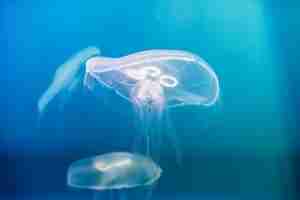 Jellyfish are a type of cnidarian, which also includes other stinging creatures such as sea anemones and coral. There are many different species of jellyfish, but the most common in Myrtle Beach is the moon jellyfish. These jellyfish are typically about 12 inches in diameter and have a mild venom that causes only minor skin irritation.

Jellyfish can be found in most of the world’s oceans, but they are particularly prevalent in the warmer waters of the southern United States. In Myrtle Beach, they are most commonly found in the shallower waters near the shore, although they can occasionally be found further out to sea.

One of the biggest concerns about jellyfish in Myrtle Beach is the risk of stings. While most jellyfish stings are relatively mild, some people may have a severe allergic reaction to the venom. Symptoms of a jellyfish sting include pain, redness, and itching at the site of the sting, as well as nausea, dizziness, and difficulty breathing. If you are stung by a jellyfish, it is important to remove any remaining tentacles and then rinse the area with vinegar or a solution of baking soda and water. You should also seek medical attention if you experience severe symptoms or if you have a known allergy to jellyfish venom.

Another way to avoid jellyfish stings is by wearing protective clothing such as a full-body wetsuit or stinger suit and applying Safe Sea Lotion on the face, hands, and all the exposed parts. These suits protect the wearer from jellyfish stings and other hazards while swimming in the ocean.

Despite the potential danger, jellyfish are essential to the ocean ecosystem. They serve as food for various marine animals and help control the populations of other species. They are also popular subjects for photography and artwork, and many people enjoy observing these creatures in their natural habitat.

Overall, jellyfish in Myrtle Beach can be a source of concern for beachgoers. Still, with the proper precautions and knowledge, they can also be a fascinating and enjoyable part of the ocean experience.

In conclusion, Jellyfish are a common sight in Myrtle Beach and are a source of both wonder and concern for beachgoers. They are most commonly found in the shallower waters near the shore, and the most common species in Myrtle Beach is the moon jellyfish. They have venom that only causes minor skin irritation, but some people may have a severe allergic reaction to it. To avoid jellyfish stings, it is important to be aware of the risk and to take precautions when swimming in the ocean. Wearing protective clothing such as a full-body wetsuit or stinger suit is an excellent way to avoid jellyfish stings.